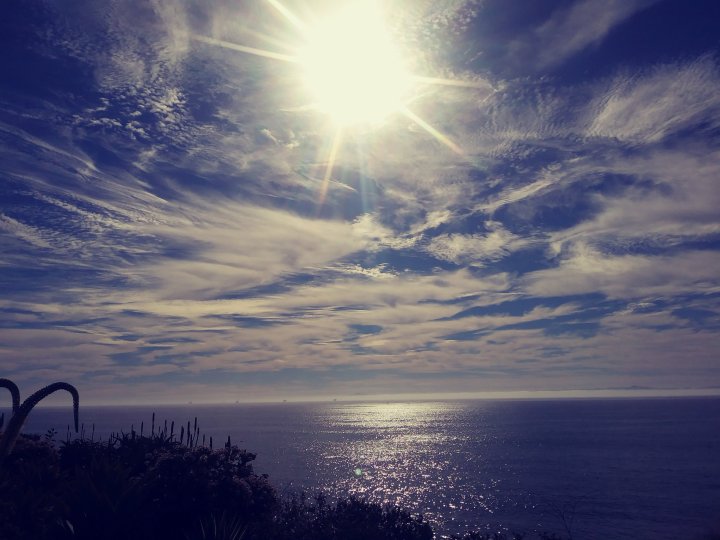 December 20, 2018. One of the most beautiful days of this year, 73 degrees and sunny. your life in california.

I snapped this picture again with my LG mobile phone, cracked screen and all. This is right above Butterfly Beach in Montecito, just off the end of a cool little bike trail covered with flowers and plants on both sides. This path is interesting for me, it reminds me so much of a trail up near Hoag Hospital in Newport Beach. A trail in which I stumbled upon after being hospitalized in Hoag for an infection in my arm from IV drug use.

I was listening to Waiting Room by Fugazi when I stopped to take the picture, seemingly the perfect song in that moment. The view took me back to that August day in 2014 when I left the hospital with nothing but the clothes I walked in with and a bottle of Tramadol.

They gave me Methadone for the two days I was there so upon release I felt like “everything was going to be okay”. Although the reality was I had been homeless for years, lost contact with my new born son and family, and when the Methadone wore off id be sick. I took 10 of the Tramadol hoping to slide deeper into euphoria as I drearily walked that orange county hill.

I ran into another homeless man along the way and he had a giant bag of low grade cannabis. I was feeling kind and a longing for social interaction so I gave him a couple Tramadol and we smoked some of that shwag weed. I soon realized he was lost in some sort of psychosis. as he began talking about currently being on tour with Led Zeppelin and how they were headed to Hollywood that night. I ditched him and continued on the road to nowhere.

There are so many stories like these I have from my endeavors through the streets of southern California on up to Seattle, Alaska, Atlanta and even Omaha and Lincoln Nebraska. People ive met, crises and situations ive gone through, hospitals, county jails, greyhounds, amtraks, LA metro lines, metro links, hotel rooms, parks, bus stops, cold sidewalks, alleys and dumpsters, and smoking crack under the space needle. my life in drug addiction.

Today is one of those days where I feel happy and hopeful, in contrast to the way I have felt in my last couple entries. I am assuming it is due to the exercise, butterfly beach waves, Fugazi and the sunshine. I like being here, I like feeling happy I wish I could always feel this way. Driving on the 101 in the station wagon listening to Ceremony, blue skies and 75 degrees.

can you please teach this son to shine?

prepare to be let down..