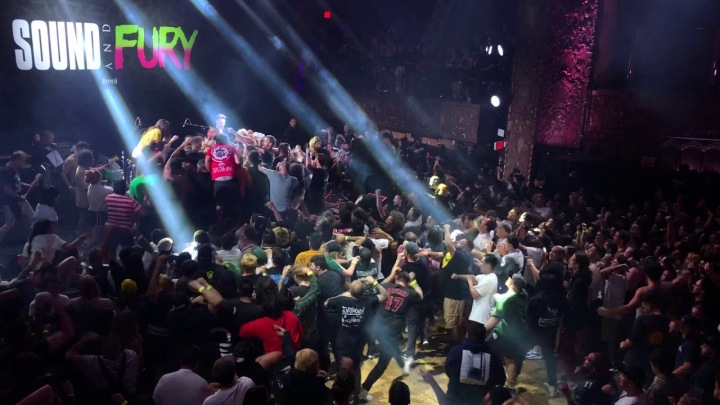 One of the definitions of substance is “the real physical matter of which a person or thing consists, and which has a tangible solid presence.” I believe that music can be defined in that way, a CD is physical matter and when played it creates a solid presence, imo. There is a type of music that most of the world doesn’t know about, a type of music that altered my life from the moment it was introduced to me. Hardcore.
Now most people hear “hardcore” and immediately go to pig squeal type screaming, or growling that cannot even be understood. Or, just a thought of something that doesn’t sound appealing or suitable for the average ear. Hardcore music is not pig squeals or growls, it is punk rock with a twist, heavier and more melodic.
Lyrically, hardcore bands range from straight edge drug free vegan messages to dark, pain filled poetry with a lot of common threads sprinkled into all of that. Love for the city you come from, deep resentments against people who have betrayed your trust and/or having fallen away from the ties you once had. Angry, vulnerable, emotional, passionate, prideful, proud, tolerant, intolerant, love, hate, hope, hopelessness, fear, faith. But not Faith in God, if a band chooses to speak of God or religion it is usually opposing both. However, I find that a lot of those songs are speaking to just a spiritual struggle, and the disgust of the corrupt human beings who are conveying “God’s Message”. Society Verse by Ross Farrar helped me with all of that. Anger, rage, love, hate, pain, hopelessness, hope, dark, light, depression, worry, fear, angst, death, life.
There is another aspect to this music that will be hard for me to put into words. Since I began listening to hardcore I have never looked at cold nights, rainy days, summer nights, summertime, the sun and the stars, nighttime, clouds, streets, streetlights and sidewalk pavement, wet pavement after the rain, the city or the lights of the city the same.  Bands like Sinking Ships, Go It Alone, Verse, Have Heart, Ruiner and Champion have a way of describing these sensory environments that has changed my perspective, the way I appreciate and visually notice the world around me, the way I smell the air each time I walk outside.  The difference between summer air and winter air. “Its getting so much colder now but my heart is still stuck in that summertime.” ” somebody told me that the rain would always come to wash away the pain.”
Ceremony, Sinking Ships, Have Heart, Ruiner, Defeater, Go It Alone, Rotting Out, Verse, Lights Out, Trash Talk, Miles Away, Champion, Gorilla Biscuits, Carry On, Comeback Kid, Killing the Dream, Terror. The words and music of these bands have got me through some of the darkest and tragic times in my life. When I no longer had heroin, I had hardcore. Its really a beautiful thing.
All this being said about the content of this genre and I have yet to speak of hardcore music performed live.
The first hardcore show I ever attended was a  Ceremony show at Showcase Theatre in 2006. This was my first experience of an attention getting, simple but intricate, introduction and preface to something extraordinary.  A trait I have acquired and held tight over the years, grab the attention of the audience with something simple but thought provoking. Ceremony did this by dimming the stage lights and performing only the guitar riff of the “Violence” leading straight into a rambunctious opening song.
A wave of kids stomping back and forth across the floor. Above the knee shorts,
windbreakers and worn Vans planting on the stage and front flipping into the crowd. Sweaty, adrenaline filled kids swarm toward the vocalist and begin screaming the words to the song along side him, on top of him or one top of one another. When those words connect to your heart you want to scream them as loud as you can, as close as possible to the person with the mic.
Most bands have a fan favorite, or a song that has turned into an anthem over the years. This song is usually played at the end of the set, not always but sometimes. At that Ceremony show in 2006 when they broke in to “I Want to Put This to an End” the entire place went off, even more so than they had for the prior 30 minutes. Fighting each other to get on the stage and pile up like that wall of dead bodies in “300”, except these ones were alive. Alive and yelling, “I find problems I’m a fucked up kid, I’ve got problems I’m alone again.”
I found myself in the middle of all that pouring my angst and pain out with a group of people who were feeling the same, side by side. The years following I lost touch with myself and who I was, what I sought in pain relief I found in drugs, unfortunately. I became powerless, and completely disconnected from reality and the world around me, with that came loss of connection with the music that touched my soul as a kid.
About 9 months into sobriety I stumbled across Final Fight somehow on Spotify and awoke my dormant connection with hardcore.  Being sober almost 4 years now I have dove deeper and deeper into the power of this music which I discovered when I was 15. It is different now, I don’t worry about what the “hardcore kids” will think of me, how should I dress, how do I stage dive and circle pit at shows, none of that shit matters to me. To me, its much deeper than that, I’ve experienced pain and suffering in life that is beyond measure. The same pain I hear in the words of Ruiner and Go It Alone, over heavy instrumentals that make you wanna stomp your feet and jump off the nearest standing object.
Thank you hardcore, for changing my life..