No Divide.  Fast, Thrashy, Angry and Heavy.  The perfect band to set the tone for a small show in a bar in Grover Beach where the punk scene is alive and well.  Especially with long time street punks The Casualties coming into town rockin a new frontman after the nototrious Jorge gave up the crown.  First, back to NO DIVIDE.  Friends of mine from Santa Barbara that have put together a raw three piece band and are up and coming in the central coast punk scene playing shows and recording music.  It’s like D.R.I. meets Negative FX with a female vocalist that sounds NOTHING like Vice Squad or The Voids but some gritty real pain with a lot of heart. Keep your eye’s peeled for NO DIVIDE playing soon in a city near you.  Now, The Casualties… oh the Casualties… with their recent allegations of sexual assaults and losing Jorge the face of their band for 27 years they came rollin into Grover Beach mohawks, studded vests and all.  They put on a decent show (No Divide and Los Creepers were better) playing some classics like “Riot” and “Made in NYC” which I found myself getting pretty hyped for, I grew up listening to Die Hards on repeat. UP THE PUNX!.  And of course the classic “Punk Rock Love”.  After breaking my ankle at Sound and Fury Fest this summer during a Bracewar set it was nice to hear live music again and know that my slamdancing days may not be over just yet.  It was great to see all the kids out for the show, smoking cigarettes and talking shit like any good punk rock kid should be doing.  There is something special about being in a tightly packed space with a bunch of sweaty kids jumping off shit and stomping around angrily in a circle.  I grew up going to Showcase Theatre in Corona, CA and punk shows were a place for me to get wild with my friends and just let go of all the stress I had, sing alongs, stage dives and 40 oz. King Cobras.  Being 26 and sober now I still love the atmosphere a small venue provides.  Punk is not dead, and we will always be OUT OF STEP…WITH THE WORLD. 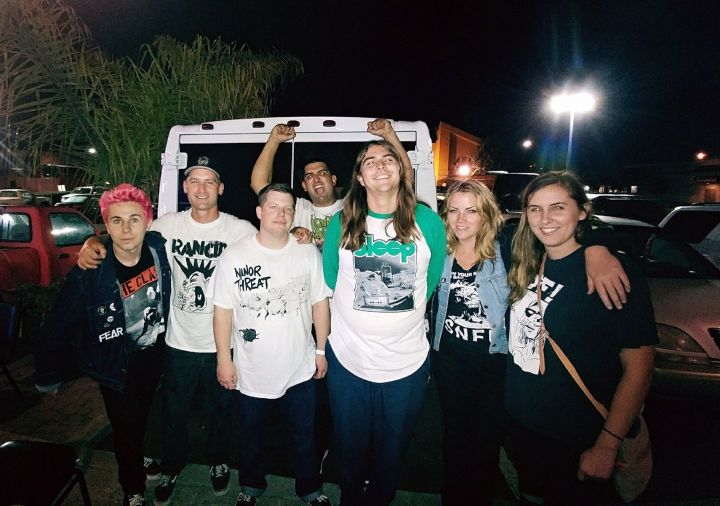